In the head-start program we raise and release small crocodiles. We assume that this gives them an advantage because they are bigger and stronger than when they were still hatchlings. However is this true? Do they actuall survive better?
We know that in the wild only few of the hatchlings will survive their first months, and in the rearing station that survival rate is significantly higher. But what happens after release? Can the head-started juveniles, after spending up to two years in captivity, adapt to wild conditions again? And if so, where should we release them? Anywhere will do? Or should it be near the wild population because that is a place we know for sure that crocodiles can live? But on the other hand there is lots of competition, and the natural habitat is often a fast flowing river, so we release the crocodiles in man-made ponds. So does that work well?
All these questions and more are being investigated. We do this by small experiments at the rearing station to determine the best rearing strategy, and by keeping track of the released crocodiles. Once a year we go back to the places where the juveniles were released, or where we know they have moved to, and we try to recapture as many as possible of them. Only temporarily of course. We measure them and check their health, and then release them back where we caught them. 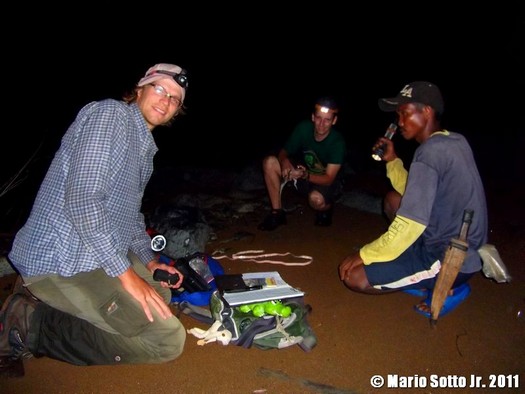 Measuring the juveniles when we catch them on the spot

This gives really interesting results, and we can now estimate that approximately 50% of the juveniels that we release do actually survive their first yearr in the wild. Since this number is much bigger than that of wild crocodiles, we call our head-start program a success. However the real success would be only proven when the head-started crocodiles will start breeding and thereby contribute to the wild population. However up to now, our juveniles are not yet adults, so we will have to wait for a few more years to find the answer to that question. 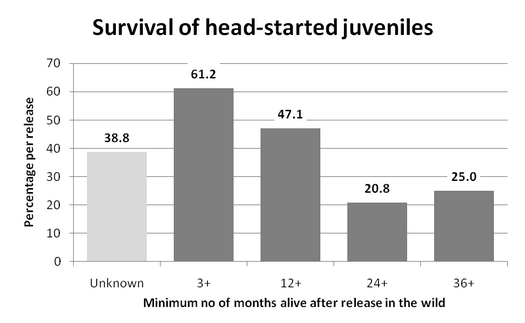 Graph: Almost 50% of all released juveniles survive their first year in the wild. This is a minimum estimate. As can be seen there is 38% of the individuals of whom the fate is unknown. These individuals might very well still survive 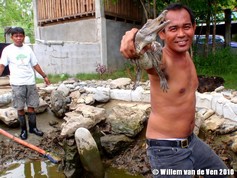 Recapturing juveniles in the soft release ponds outside the rearing station 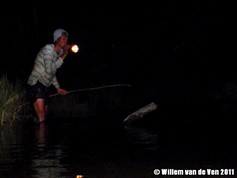 Recapturing juveniles with a flashlight and a noose-trap 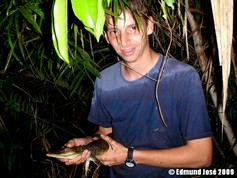 Recapturing juveniles can be a wet business