Head-start program
Release of juvenile crocodiles back into the wild 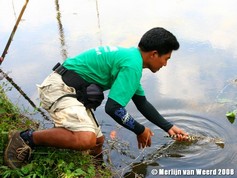 When the juveniles are large and strong enough to be released back into the wild, they are given a final checkup, are measured and weighed, and then packed in special pvc tubes. We always invite the community to join us at the release site, usually including schoolchildren, but often also government dignitaries or other VIPs to join in these special events. Also film and radio-crews often join to inform the rest of the world of another batch of the world’s rarest crocodile being released back into the wild. Previous guests included: Hon. Jerome Stanley Q. Miranda (then Municipal Board Member), Hon. Ana Christina Go (then Provincial Board Member of Isabela, now Congresswoman), Mr. Robert Brinks (Dutch Ambassador to the Philippines), Hon. Ma. Cielo Gracia Padaca (then Provincial Governor of Isabela), Terry Cullen (Member of the Crocodile Specialist Group), ‘Born to be Wild’ (National TV-show, GMA 7), ‘Bombo Radyo’ (Cauayan), and many more. 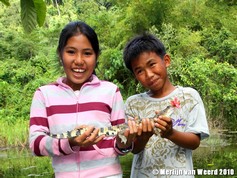 Former governor of the province of Isabela, hon. Ma. Cielo Gracia Padaca, releasing a head-started crocodile back into the wild.