Research component
Quarterly Monitoring Surveys
A core activity of the Mabuwaya Foundation from the start, is quarterly monitoring of identified crocodile sub-populations has proven a very effective tool in conservation planning and in monitoring the success of conservation interventions. During the monitoring survey the team (usually consisting of two team members and several locally hired community guides) spends several days and nights at a locality and conducts day light crocodile and track searches and night time flashlight surveys. Crocodile eyes reflect flashlight strongly red at night. Night surveys are repeated over several nights to come up with a sound minimum population count. Crocodile sizes are estimated and pooled in the categories hatchling, juvenile/sub-adult and adult to determine population structure. Apart from counting crocodiles, habitat changes are monitored as well. These activities are being executed with the partcipation of  the local protection groups (Bantay Sanktuwaryo). These groups are tasked to monitor crocodiles/ human activities in crocodile sanctuaries and wetland habitat. There are two main monitoring areas: the municipality of San Mariano on the western side of the Northern Sierra Madre Natural Park (NSMNP) and the municipality of Divilacan on the coastal side of the NSMNP.

During the quarterly physical and biological monitoring surveys the team members usually stay with community members. To institutionalize a quarterly dialogue with communities near crocodile localities, focus group discussions will be held. The focus group will consist of members of the local protection groups and key community members. Issues pertaining to crocodiles, wetlands and the community will be noted and discussed. Common solutions and localized conservation actions will be defined during these focus group discussions.


Back to top Back to homepage 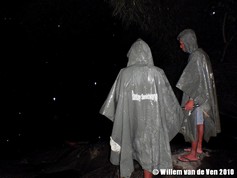 Bantay Sanktuwaryo doing a spotlight survey in the rain