The Saltwater crocodile is normally found in coastal waters, mangroves, rivers and large lakes that are connected to the sea. It is also known as the Estuarine crocodile. This species is able to survive long periods in saltwater and is capable to travel long distances through open sea. It is the longest crocodile in the World with recorded maximum lengths of up to 6 meters. Because of its size, large adult Saltwater crocodiles are potentially very dangerous to people and are feared as occassional man-eaters.

The Philippine crocodile in contrast is much smaller with a maximum recorded length of about 3 meters. This species lives in freshwater habitats such as lakes, rivers and creeks but is also known to occassionaly venture into saltwater habitats such as mangrove forest and intertidal coastal areas, possibly when moving between coastal rivers. It has been found from sea level up to an elevation of 800 meters in the Cordillera Mountains although it normally does not live that high.

Crocodiles in the Philippines 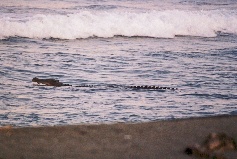 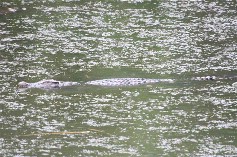